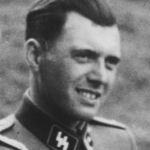 Why Is Josef Mengele Influential?

According to Wikipedia, Josef Mengele , also known as the Angel of Death , was a German officer and physician during World War II. He is mainly remembered for his actions at the Auschwitz II concentration camp, where he performed deadly experiments on prisoners, as a member of the team of doctors who selected victims to be killed in the gas chambers and as one of the doctors who administered the gas. With Red Army troops sweeping through German-occupied Poland, Mengele was transferred from Auschwitz to the Gross-Rosen concentration camp on 17 January 1945, ten days before the arrival of the Soviet forces at Auschwitz.

Other Resources About Josef Mengele

What Schools Are Affiliated With Josef Mengele?

Josef Mengele is affiliated with the following schools: