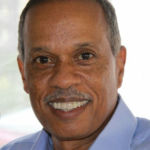 Why Is Juan Williams Influential?

According to Wikipedia, Juan Antonio Williams is a Panamanian-born American journalist and political analyst for Fox News Channel. He writes for several newspapers, including The Washington Post, The New York Times, and The Wall Street Journal, and has been published in magazines such as The Atlantic and Time. Williams has worked as an editorial writer, an op-ed columnist, a White House correspondent, and a national correspondent. He is a registered Democrat.

Other Resources About Juan Williams

What Schools Are Affiliated With Juan Williams?

Juan Williams is affiliated with the following schools: