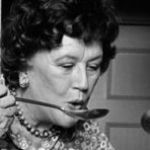 Why Is Julia Child Influential?

According to Wikipedia, Julia Carolyn Child was an American cooking teacher, author, and television personality. She is recognized for bringing French cuisine to the American public with her debut cookbook, Mastering the Art of French Cooking, and her subsequent television programs, the most notable of which was The French Chef, which premiered in 1963.

Other Resources About Julia Child

What Schools Are Affiliated With Julia Child?

Julia Child is affiliated with the following schools:

What Are Julia Child's Academic Contributions?

Julia Child has made the following academic contributions: