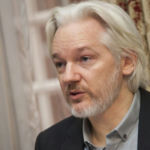 Why Is Julian Assange Influential?

According to Wikipedia, Julian Paul Assange is an Australian editor, publisher and activist who founded WikiLeaks in 2006. WikiLeaks came to international attention in 2010 when it published a series of leaks provided by U.S. Army intelligence analyst Chelsea Manning. These leaks included the Baghdad airstrike Collateral Murder video , the Afghanistan war logs , the Iraq war logs , and Cablegate . After the 2010 leaks, the United States government launched a criminal investigation into WikiLeaks.

Other Resources About Julian Assange

What Schools Are Affiliated With Julian Assange?

Julian Assange is affiliated with the following schools:

What Are Julian Assange's Academic Contributions?

Julian Assange has made the following academic contributions: