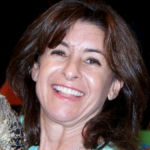 Why Is Julie Scardina Influential?

According to Wikipedia, Julie Scardina is Animal Ambassador and Corporate Curator for SeaWorld, Busch Gardens, and Discovery Cove zoological parks. She was formerly curator of animal training for SeaWorld San Diego. Scardina is a professional animal trainer and educator, who is perhaps best known for regular appearances on The Tonight Show with Jay Leno, where she was introduced by Leno as the most frequent guest before he ended his reign. Scardina's segments focused on conservation information about species and what the public can do to help animals. Scardina also appears monthly on Today with animal information segments and formerly filmed weekly segments for Jack Hanna's Animal Adventures.

Other Resources About Julie Scardina

What Schools Are Affiliated With Julie Scardina?

Julie Scardina is affiliated with the following schools: