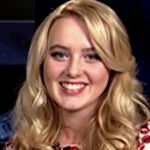 Why Is Kathryn Newton Influential?

According to Wikipedia, Kathryn Newton is an American actress. She is known for her starring roles as Louise Brooks in the CBS comedy series Gary Unmarried , Abigail Carlson in the HBO mystery drama series Big Little Lies , and Allie Pressman in the Netflix teen drama series The Society . She is also known for portraying the older versions of Claire Novak in The CW dark fantasy series Supernatural and Joanie Clark in the AMC period drama series Halt and Catch Fire .

Other Resources About Kathryn Newton