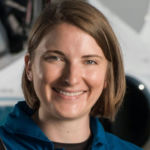 Why Is Kayla Barron Influential?

According to Wikipedia, Kayla Jane Barron is an American submarine warfare officer, engineer and NASA astronaut. Early life and education Kayla Barron was born on September 19, 1987 in Pocatello, Idaho to Lauri and Scott Sax. Her family moved to Richland, Washington, where she graduated from Richland High School in 2006. After high school, Barron attended the United States Naval Academy, where she graduated in 2010 with a bachelor's degree in systems engineering.

Other Resources About Kayla Barron

What Schools Are Affiliated With Kayla Barron?

Kayla Barron is affiliated with the following schools: