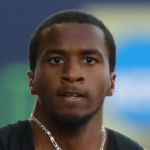 Why Is Kendal Williams Influential?

According to Wikipedia, Kendal Williams is an American professional track and field athlete specializing in the sprints. Representing the United States at the 2014 World Junior Championships in Athletics, he earned gold medals in the 100 meters and the relay, upsetting teammate and favorite Trayvon Bromell in the who had earlier that year become the first junior to break the 10-second barrier.

Other Resources About Kendal Williams

What Schools Are Affiliated With Kendal Williams?

Kendal Williams is affiliated with the following schools: