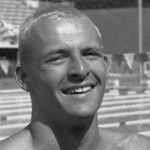 Why Is Lance Larson Influential?

According to Wikipedia, Lance Melvin Larson is an American former competition swimmer, Olympic champion, and former world record-holder in four events. Early years Larson was born in Monterey Park, California, and attended El Monte High School. He set CIFSS records in 1957 and 1958 in the 100-yards butterfly of 55.5 and 54.6 seconds, and another CIFSS record in 1958 in the 100-yard freestyle of 50.9 seconds. He was the first high school swimmer to break the 50-second barrier in the 100-yard freestyle. Larson was the first man in the world to swim the 100-meter butterfly in under sixty seconds. He enrolled in the University of Southern California, where he swam for the USC Trojans swimming and diving team in National Collegiate Athletic Association competition. He was an "all-around" swimmer in the four-stroke individual medley, the butterfly, and the sprint freestyle, and he won Amateur Athletic Union national championships in all three.

Other Resources About Lance Larson

What Schools Are Affiliated With Lance Larson?

Lance Larson is affiliated with the following schools: