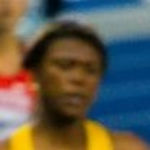 Why Is Lashinda Demus Influential?

According to Wikipedia, Lashinda Demus is an American hurdler who specializes in the 400 meter hurdles, an event in which she was the 2011 world champion and 2012 Olympic silver medalist. Her personal best time over 400m hurdles is 52.47 seconds in Daegu, South Korea on September 1, 2011, which is currently the women's 5th fastest time ever. At the time it was the American record in 400m hurdles.

Other Resources About Lashinda Demus

What Schools Are Affiliated With Lashinda Demus?

Lashinda Demus is affiliated with the following schools: