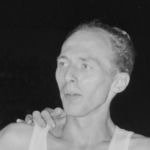 Why Is László Tábori Influential?

According to Wikipedia, László Tábori was a Hungarian middle- and long-distance runner, best known for equalling the 1500 metres world record and placing 4th in that event at the 1956 Summer Olympics. Early career and rise to fame Tábori was born in Košice. Although he had already taken up running in his youth, his serious career only started in the early 1950s under Mihály Iglói, the legendary coach of Tábori's club, Honvéd Budapest. Already part of the world-record-breaking 1953 and 1954 4 x 1500 metres relay teams of Hungary and the Honvéd Budapest club respectively, he exploded to international fame in 1955, together with Iglói's other star pupils, Sándor Iharos and István Rózsavölgyi. On May 28, 1955, he became only the third man in the world to run a four-minute mile, running 3:59.0 and soundly beating both Chris Chataway and Brian Hewson. On September 6, he equalled the 1500 metres world record with a time of 3:40.8.

Other Resources About László Tábori

What Schools Are Affiliated With László Tábori?

László Tábori is affiliated with the following schools: