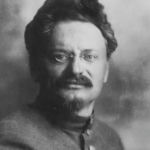 Why Is Leon Trotsky Influential?

According to Wikipedia, Lev Davidovich Bronstein , better known as Leon Trotsky , was a Ukrainian-Russian Marxist revolutionary, political theorist and politician. Ideologically a communist, he developed a variant of Marxism which has become known as Trotskyism.

Other Resources About Leon Trotsky

What Schools Are Affiliated With Leon Trotsky?

Leon Trotsky is affiliated with the following schools:

What Are Leon Trotsky's Academic Contributions?

Leon Trotsky has made the following academic contributions: