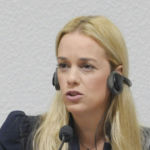 Why Is Lilian Tintori Influential?

According to Wikipedia, Lilian Adriana Tintori Parra is a Venezuelan activist, athlete, and television and radio host. Tintori is the wife of Leopoldo López, a Venezuelan politician sentenced in 2015 to nearly 14 years in prison for "inciting violence" during street protests the year before. She has also led groups who have opposed the government of Venezuelan President Nicolás Maduro.

Other Resources About Lilian Tintori

What Schools Are Affiliated With Lilian Tintori?

Lilian Tintori is affiliated with the following schools: