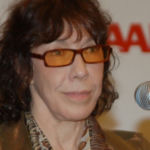 Why Is Lily Tomlin Influential?

According to Wikipedia, Mary Jean "Lily" Tomlin is an American actress, comedian, writer, singer, and producer. She started her career as a stand-up comedian as well as performing off-Broadway during the 1960s. Her breakout role was on the variety show Rowan & Martin's Laugh-In from 1969 until 1973. She starred as Frankie Bergstein on the Netflix series Grace and Frankie, which debuted in 2015 and earned her nominations for four Primetime Emmy Awards, three Screen Actors Guild Awards, and a Golden Globe Award.

Other Resources About Lily Tomlin

What Schools Are Affiliated With Lily Tomlin?

Lily Tomlin is affiliated with the following schools: