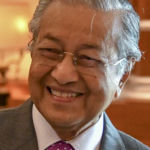 Why Is Mahathir Mohamad Influential?

According to Wikipedia, Mahathir bin Mohamad is a Malaysian politician, author, and doctor who served as the fourth and seventh prime minister of Malaysia. He held office from July 1981 to October 2003 and later from May 2018 to March 2020 for a cumulative total of 24 years, making him the country's longest-serving prime minister. Before his promotion to the premiership, he served as Deputy Prime Minister and in other Cabinet positions. He has served as a member of parliament for Langkawi since May 2018, Kubang Pasu from August 1974 to March 2004, and Kota Setar Selatan from April 1964 to May 1969. His political career has spanned more than 75 years since he first joined a newly formed United Malays National Organisation in 1946 opposing Malayan Union to forming his own political parties; the Malaysian United Indigenous Party in September 2016 and the Homeland Fighters' Party in August 2020 todate.

Other Resources About Mahathir Mohamad

What Schools Are Affiliated With Mahathir Mohamad?

Mahathir Mohamad is affiliated with the following schools: