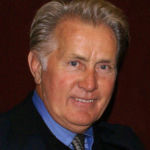 Why Is Martin Sheen Influential?

According to Wikipedia, Ramón Antonio Gerardo Estévez , known professionally as Martin Sheen, is an American actor. He first became known for his roles in the films The Subject Was Roses and Badlands , and later achieved wide recognition for his leading role as Captain Benjamin Willard in Apocalypse Now , as U.S. President Josiah Bartlet in the television series The West Wing , and as Robert Hanson in the Netflix television series Grace and Frankie .

Other Resources About Martin Sheen