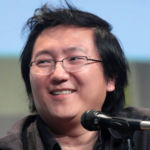 Why Is Masi Oka Influential?

According to Wikipedia, is a Japanese actor, producer, and digital effects artist who became widely known for starring in NBC's Heroes as Hiro Nakamura and in CBS's Hawaii Five-0 as Doctor Max Bergman. Early life Oka was born in Tokyo, Japan, to Setsuko Oka. His parents divorced when he was one month old; he was raised in a single parent family and has never met his father. He was six years old when his mother and he moved to Los Angeles from Japan. At age eight, he appeared on the CBS-TV game show Child's Play. In 1987, a 12-year-old Oka was featured as one of several children on the cover of Time magazine, for the article "Those Asian-American Whiz Kids." Though he was not featured in the article itself, he was acquainted with the photographer who conducted the shoot. In 1988, he placed fourth in the California state MATHCOUNTS competition and was one of the four students to represent the state of California in the national competition.

Other Resources About Masi Oka

What Schools Are Affiliated With Masi Oka?

Masi Oka is affiliated with the following schools: