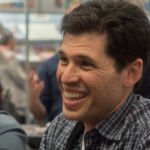 Why Is Max Brooks Influential?

According to Wikipedia, Maximillian Michael Brooks is an American actor and author. He is the son of comedy filmmaker Mel Brooks and actress Anne Bancroft. Much of Brooks's writing focuses on zombie stories. He is a senior fellow at the Modern War Institute at West Point, New York.

Other Resources About Max Brooks

What Schools Are Affiliated With Max Brooks?

Max Brooks is affiliated with the following schools:

What Are Max Brooks's Academic Contributions?

Max Brooks has made the following academic contributions: