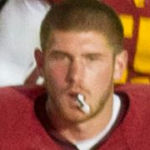 Why Is Max Wittek Influential?

According to Wikipedia, Max Nolan Wittek is a former American football quarterback. He played at USC from 2011 to 2013, and transferred to Hawaii, sitting out the 2014 season. Early years Born in Contra Costa County, California, Wittek grew up in Norwalk, Connecticut but later moved to Santa Ana, California where he attended Mater Dei High School. His immediate predecessor as starting quarterback for Mater Dei was future USC teammate Matt Barkley. As a senior, he completed 153 of 282 passes for 2,252 yards with 24 touchdowns and 15 interceptions. He was ranked as the third best pro-style quarterback recruit in his class by Rivals.com. He committed to USC in April 2010.

Other Resources About Max Wittek