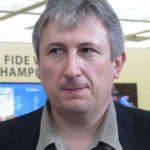 Why Is Maxim Dlugy Influential?

According to Wikipedia, Maxim Alexandrovich Dlugy is an American chess player with the FIDE title of Grandmaster . He was born in Moscow, USSR, and arrived with his family in the United States in 1977. He was awarded the International Master title in 1982. He won the World Junior Chess Championship in 1985. He was awarded the Grandmaster title in 1986 for his result at the World Chess Olympiad in Dubai, United Arab Emirates, where he played on the U.S. team that was in first place going into the last round. Always a strong speed chess player, Dlugy was formerly ranked number one in the world by the World Blitz Chess Association.

Other Resources About Maxim Dlugy