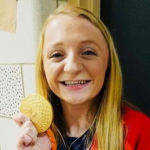 Why Is McKenzie Coan Influential?

According to Wikipedia, McKenzie Coan is an American swimmer. At the 2012 Summer Paralympics in London, she swam the 400m Freestyle in the S8 category. Coan was one of four S8 category swimmers chosen to compete for Team USA at the games. She later had her breakout games in the 2016 Summer Paralympics, where she would go on to win 3 gold medals in the category S7 50, 100, and 400M Freestyle races, with an additional silver medal in the 34-point women's Freestyle relay. In the process of getting her gold medal in the 50M Freestyle she also set a new Paralympic Record.

Other Resources About McKenzie Coan

What Schools Are Affiliated With McKenzie Coan?

McKenzie Coan is affiliated with the following schools: