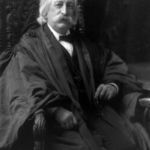 Why Is Melville Fuller Influential?

According to Wikipedia, Melville Weston Fuller was an American politician, lawyer, and jurist who served as the eighth chief justice of the United States from 1888 until his death in 1910. Staunch conservatism marked his tenure on the Supreme Court, exhibited by his tendency to support unfettered free enterprise and to oppose broad federal power. He wrote major opinions on the federal income tax, the Commerce Clause, and citizenship law, and he took part in important decisions about racial segregation and the liberty of contract. Those rulings often faced criticism in the decades during and after Fuller's tenure, and many were later overruled or abrogated. The legal academy has generally viewed Fuller negatively, although a revisionist minority has taken a more favorable view of his jurisprudence.

Other Resources About Melville Fuller

What Schools Are Affiliated With Melville Fuller?

Melville Fuller is affiliated with the following schools: