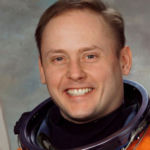 Why Is Michael Fincke Influential?

According to Wikipedia, Edward Michael "Mike"/"Spanky" Fincke is an American astronaut who formerly held the American record for the most time in space . His record was broken by Scott Kelly on October 16, 2015. Mike Fincke was born in Pittsburgh, Pennsylvania, but considers its suburb Emsworth to be his hometown. He is a retired United States Air Force officer and an active NASA astronaut. So far he served two tours aboard the International Space Station as a flight engineer and Commander. He flew on one Space Shuttle mission, STS-134 as a Mission Specialist. Fincke is conversant in Japanese and Russian. He is married to Renita Saikia, and together they have three children; son Chandra and daughters Tarali and Surya.

Other Resources About Michael Fincke

What Schools Are Affiliated With Michael Fincke?

Michael Fincke is affiliated with the following schools: