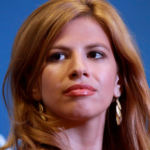 Why Is Michelle Fields Influential?

According to Wikipedia, Michelle Fields is an American political journalist who formerly wrote for The Huffington Post, and was a reporter for Breitbart News, as well as a Fox News contributor. After graduating from college, Fields was hired as a reporter at The Daily Caller. She later became a correspondent for PJ Media. Fields is a former panelist on the Fox News program Cashin' In. In 2016, Fields accused Donald Trump's campaign manager Corey Lewandowski of grabbing her arm at a press conference. At the time, Fields was a reporter for Breitbart, but resigned her position in March 2016, due to the organization's handling of the Lewandowski incident.

Other Resources About Michelle Fields

What Schools Are Affiliated With Michelle Fields?

Michelle Fields is affiliated with the following schools: