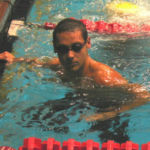 Why Is Mihail Alexandrov Influential?

According to Wikipedia, Mihail Alexandrov is an Olympic swimmer from Bulgaria. He swam for Bulgaria at the 2004 and 2008 Olympics. Alexandrov has been swimming for the USA since 2009. Alexandrov, who has dual Bulgarian/USA citizenship, swam for the USA's Northwestern University from 2003 to 2007,. In March 2007 he set a USA National Record in the 100 yard breaststroke at the NCAA Division I Swimming and Diving Championships, while swimming for Northwestern. This was despite the fact that he had not swum internationally for the US at that time and that he was viewed as a Bulgarian swimmer. The USA Swimming rules at the time allowed for the USA National mark to be set by a swimmer who could represent the US in international competition and who at the time of the swim was not representing another country . USA Swimming's rules have subsequently been altered so that only swimmers currently representing the USA internationally can set the "American" Record. Alexandrov's record was broken in 2012 by Kevin Cordes.

Other Resources About Mihail Alexandrov

What Schools Are Affiliated With Mihail Alexandrov?

Mihail Alexandrov is affiliated with the following schools: