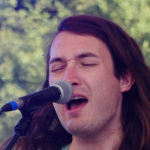 Why Is Mikal Cronin Influential?

According to Wikipedia, Michael "Mikal" Patrick Cronin is an American musician and songwriter. He has released four solo albums and several singles. Cronin was a member of the bands Okie Dokie, Epsilons, Party Fowl and Moonhearts, and is a regular and longtime member of Ty Segall's live band, contributing bass guitar, backing vocals and saxophone; he has also released an album and a single in collaboration with Segall. Cronin earned his Bachelor of Fine Arts in music from California Institute of the Arts.

Other Resources About Mikal Cronin