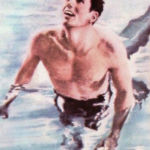 Why Is Mike Burton Influential?

According to Wikipedia, Michael Jay Burton is an American swimmer, three-time Olympic champion, and former world record-holder in two freestyle distance events. When he was an eighth grader he was hit by a furniture truck while riding a bicycle with a friend. Earlier he loved to play football and basketball, but the injuries due to this accident made him abandon contact sports, and left swimming as one of the few fitness options.

Other Resources About Mike Burton

What Schools Are Affiliated With Mike Burton ?

Mike Burton is affiliated with the following schools: