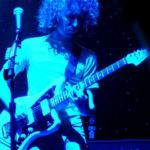 Why Is Mike Einziger Influential?

According to Wikipedia, Michael Aaron Einziger is an American musician, songwriter and producer. He is best known for being co-founder and guitarist of the rock band Incubus, and has also co-written, produced and collaborated with a wide array of artists including Pharrell Williams, Hans Zimmer, Skrillex, Tyler the Creator, Avicii, Damian Marley, Jason Schwartzman and Steve Martin among many others. Incubus has sold over 23 Million albums worldwide, and in 2013, Einziger co-wrote the hit song "Wake Me Up", alongside Avicii and Aloe Blacc. As an entrepreneur, Einziger is the co-founder and co-chairman of the wireless technology platform MIXhalo, and also the co-founder and CEO of the biotechnology startup Versicolor Technologies. Einziger received his education at Harvard University.

Other Resources About Mike Einziger

What Schools Are Affiliated With Mike Einziger?

Mike Einziger is affiliated with the following schools: