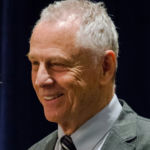 Why Is Morris Dees Influential?

According to Wikipedia, Morris Seligman Dees Jr. is an American attorney known as the co-founder and former chief trial counsel for the Southern Poverty Law Center , based in Montgomery, Alabama. He ran a direct marketing firm before founding SPLC. Along with his law partner, Joseph J. Levin Jr., Dees founded the SPLC in 1971. Dees and his colleagues at the SPLC have been "credited with devising innovative ways to cripple hate groups" such as the Ku Klux Klan, particularly by using "damage litigation".

Other Resources About Morris Dees

What Are Morris Dees's Academic Contributions?

Morris Dees has made the following academic contributions: