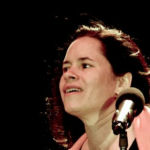 Why Is Natalie Merchant Influential?

According to Wikipedia, Natalie Anne Merchant is an American alternative rock singer-songwriter. She joined the band 10,000 Maniacs in 1981 and was lead vocalist and primary lyricist for the group. She remained with the group for their first seven albums and left it to begin her solo career in 1993. She has since released seven studio albums as a solo artist.

Other Resources About Natalie Merchant

What Schools Are Affiliated With Natalie Merchant?

Natalie Merchant is affiliated with the following schools: