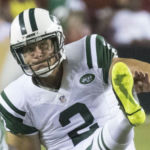 Why Is Nick Folk Influential?

According to Wikipedia, Nicholas Alexander Folk is an American football placekicker for the New England Patriots of the National Football League . He played college football at Arizona, where he received first-team All-Pac-10 honors, and was selected by the Dallas Cowboys in the sixth round of the 2007 NFL Draft. During his three seasons with the Cowboys, Folk was named to the Pro Bowl as a rookie. He played his next seven season as a member of the New York Jets, becoming the franchise's second-leading scorer. Following an unsuccessful stint on the Tampa Bay Buccaneers, Folk spent a year away from football before pursuing a comeback in 2019 with the Arizona Hotshots of the Alliance of American Football . Folk returned to the NFL the same year as a member of the Patriots and led the league in scoring during the 2021 season.

Other Resources About Nick Folk