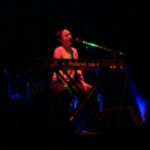 Why Is Rachel Haden Influential?

According to Wikipedia, Rachel Haden is an American musician and one of the triplet daughters of jazz bassist Charlie Haden. In the early 1990s, Haden played bass guitar for That Dog, a band that also included her sister Petra. Her sister Tanya also contributed cello on several That Dog recordings, but did not tour as an official member of the band. Around this time Haden also played drums and performed backup vocals for Beck on the songs "Totally Confused" and "Steve Threw Up". She also played drums for Beck's "Pink Noise ".

Other Resources About Rachel Haden