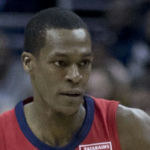 Why Is Rajon Rondo Influential?

According to Wikipedia, Rajon Pierre Rondo is an American professional basketball player who last played for the Cleveland Cavaliers of the National Basketball Association . A point guard, Rondo played two years of college basketball for the Kentucky Wildcats before being drafted 21st overall by the Phoenix Suns in the 2006 NBA draft and subsequently traded to the Celtics in a draft-day trade. Rondo is a two-time NBA champion, four-time NBA All-Star, has earned four NBA All-Defensive Team honors including two First Team honors, and was named to the All-NBA Third Team in 2012.

Other Resources About Rajon Rondo

What Schools Are Affiliated With Rajon Rondo?

Rajon Rondo is affiliated with the following schools: