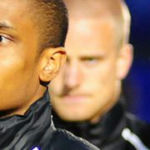 Why Is Randi Patterson Influential?

According to Wikipedia, Randi Luther Pereira-Patterson , known as Randi Patterson, is an American-born Trinidadian footballer who plays as a forward. He has been a member of the Trinidad and Tobago national team. College career Patterson spent four seasons at the University of North Carolina at Greensboro, where he was a two-time Southern Conference Player of the Year and National Soccer Coaches Association of America All-American selection. He finished his college career with 61 goals and 19 assists. Patterson grew up in Teaneck, New Jersey, raised by his mother after his father was killed in a car accident when he was two years old, and attended Bergen Catholic High School in Oradell, New Jersey, whom he led to the 1999 state championship. During his college years he also played with Carolina Dynamo of the USL Premier Development League, scoring 15 goals in his 14 games in 2006.

Other Resources About Randi Patterson