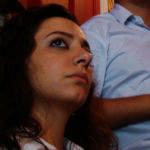 Why Is Razan Ghazzawi Influential?

According to Wikipedia, Razan Ghazzawi is a Syrian-American blogger, campaigner and activist and currently a PhD researcher at the University of Sussex. She has been highly involved in the events during the Syrian Civil War, and has been particularly outspoken on activists' arrests and the violations of human rights committed by the Bashar al-Assad government. She was called "iconic blogger and leading activist" by The Telegraph. Jillian York wrote that Ghazzawi was "one of [her] heroes."

Other Resources About Razan Ghazzawi

What Schools Are Affiliated With Razan Ghazzawi?

Razan Ghazzawi is affiliated with the following schools: