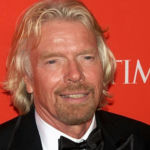 Why Is Richard Branson Influential?

According to Wikipedia, Sir Richard Charles Nicholas Branson is a British billionaire entrepreneur and business magnate. In the 1970s he founded the Virgin Group, which today controls more than 400 companies in various fields.

Other Resources About Richard Branson

What Are Richard Branson's Academic Contributions?

Richard Branson has made the following academic contributions: