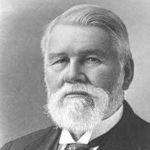 Why Is Richard Jordan Gatling Influential?

According to Wikipedia, Richard Jordan Gatling was an American inventor best known for his invention of the Gatling gun, which is considered to be the first successful machine gun. Life Gatling was born in Hertford County, North Carolina in 1818 and raised Methodist. At the age of 21, Gatling created a screw propeller for steamboats, without realizing that one had been patented just months beforehand by John Ericsson. While living in North Carolina, he worked in the county clerk’s office, taught school briefly, and became a merchant. At the age of 36, Gatling moved to St. Louis, Missouri, where he worked in a dry goods store and invented a rice-sowing machine and a wheat drill . The introduction of these machines did much to revolutionize the agricultural system in the country. After an attack of smallpox, Gatling became interested in medicine. He graduated from the Ohio Medical College in 1850 with an MD. Although he had his MD, he never practiced; he was more interested in a career as an inventor.

Other Resources About Richard Jordan Gatling

What Schools Are Affiliated With Richard Jordan Gatling?

Richard Jordan Gatling is affiliated with the following schools: