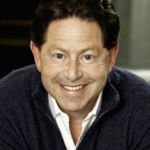 Why Is Bobby Kotick Influential?

According to Wikipedia, Robert A. Kotick is an American businessman who serves as the chief executive officer of Activision Blizzard. He became CEO of Activision in 1991 after purchasing a company stake the previous year. Kotick engineered a merger between Activision and Vivendi Games during the late 2000s, which led to the creation of Activision Blizzard in 2008 and him being named the company's inaugural CEO. He has also served on several boards, including The Coca-Cola Company from 2012 to 2022, Yahoo from 2003 to 2008, and the Call of Duty Endowment , which he co-founded in 2009 and continues to retain his position on.

Other Resources About Bobby Kotick

What Schools Are Affiliated With Bobby Kotick?

Bobby Kotick is affiliated with the following schools: