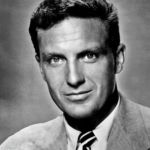 Why Is Robert Stack Influential?

According to Wikipedia, Robert Stack was an American actor. Known for his deep voice and commanding presence, he appeared in over forty feature films. He starred in the ABC television series The Untouchables , for which he won the 1960 Primetime Emmy Award for Outstanding Performance by an Actor in a Series, and later hosted/narrated the true-crime series Unsolved Mysteries . He was also nominated for an Academy Award for Best Supporting Actor for his role in the film Written on the Wind .

Other Resources About Robert Stack

What Schools Are Affiliated With Robert Stack?

Robert Stack is affiliated with the following schools: