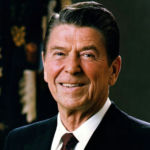 40th president of the United States and actor

Why Is Ronald Reagan Influential?

According to Wikipedia, Ronald Wilson Reagan was an American politician who served as the 40th president of the United States from 1981 to 1989. A member of the Republican Party, he previously served as the 33rd governor of California from 1967 to 1975 after a career as a Hollywood actor and union leader.

Other Resources About Ronald Reagan

What Schools Are Affiliated With Ronald Reagan?

Ronald Reagan is affiliated with the following schools:

What Are Ronald Reagan's Academic Contributions?

Ronald Reagan has made the following academic contributions: