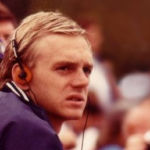 Why Is Rowdy Gaines Influential?

According to Wikipedia, Ambrose "Rowdy" Gaines IV is an American former competitive swimmer, U.S. Olympic Hall of Fame member, three-time Olympic gold medalist, and member of the International Swimming Hall of Fame. He is a swimming analyst for television network NBC. He has covered swimming at the Olympic Games since 1992 in Barcelona.

Other Resources About Rowdy Gaines

What Schools Are Affiliated With Rowdy Gaines?

Rowdy Gaines is affiliated with the following schools: