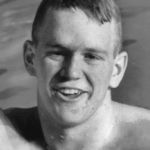 Why Is Roy Saari Influential?

According to Wikipedia, Roy Allen Saari was an American swimmer and water polo player. He qualified for the 1964 Summer Olympics in both disciplines, and chose swimming, as the Olympic rules of the time did not allow him to compete in two sports. He won a gold medal as a member of the first-place U.S. team in the 4×200-meter freestyle relay, setting a new world record in the final with teammates Steve Clark, Gary Ilman and Don Schollander . Individually he earned a silver medal in the 400-meter individual medley . He also advanced to the finals of the 400-meter freestyle and 1,500-meter freestyle, placing fourth and seventh, respectively. Before the Olympics Saari became the first person to break the 17 minute barrier over 1500 m, but in the Olympic final he was suffering from a cold and clocked a mere 17:29.2.

Other Resources About Roy Saari

What Schools Are Affiliated With Roy Saari?

Roy Saari is affiliated with the following schools: