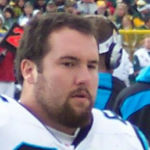 Why Is Ryan Kalil Influential?

According to Wikipedia, Ryan Joseph Kalil is an American film and television producer and former NFL center. He played college football at USC, where he was a member of two national championship teams, was named a first-team All-American, and won the 2006 Morris Trophy. He was drafted by the Carolina Panthers in the second round of the 2007 NFL Draft, where he played for 12 seasons. He also played 1 season with the New York Jets.

Other Resources About Ryan Kalil