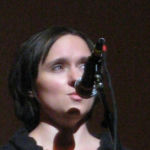 Why Is Sarah Vowell Influential?

According to Wikipedia, Sarah Jane Vowell is an American author, journalist, essayist, social commentator and actress. She has written seven nonfiction books on American history and culture. She was a contributing editor for the radio program This American Life on Public Radio International from 1996 to 2008, where she produced numerous commentaries and documentaries and toured the country in many of the program's live shows. She was also the voice of Violet Parr in the 2004 animated film The Incredibles and its 2018 sequel.

Other Resources About Sarah Vowell

What Schools Are Affiliated With Sarah Vowell?

Sarah Vowell is affiliated with the following schools:

What Are Sarah Vowell's Academic Contributions?

Sarah Vowell has made the following academic contributions: