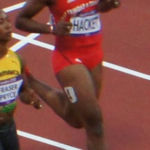 Female sprinter for Trinidad and Tobago

Why Is Semoy Hackett Influential?

According to Wikipedia, Semoy Kee-Ann Hackett is a Tobagonian track and field sprint athlete who competed collegiately at Louisiana State University. Her personal best in the 100m is 11.09, and 22.49 in 200m. Hackett represented Trinidad and Tobago at the 2008 Summer Olympics in Beijing. She competed at the 100 metres sprint and placed fourth in her first round heat, which normally meant elimination. However, her time of 11.53 seconds was among the ten fastest losing times and she qualified for the second round. There she failed to qualify for the semi finals as her time of 11.46 was the sixth time of her race. Together with Wanda Hutson, Ayanna Hutchinson and Kelly-Ann Baptiste she also took part in the 4x100 metres relay. In their first round heat they did not finish and were eliminated due to a mistake with the baton exchange.

Other Resources About Semoy Hackett

What Schools Are Affiliated With Semoy Hackett?

Semoy Hackett is affiliated with the following schools: