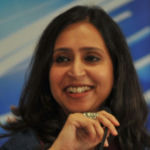 Why Is Shoma Chaudhury Influential?

According to Wikipedia, Shoma Chaudhury is an Indian journalist, editor, and political commentator. She was managing editor and one of the founders of Tehelka, an investigative public interest newsmagazine. She also co-founded and was director of THiNK, an international conference of ideas, and Algebra, the Arts & Ideas Club, a platform for live conversations with prominent Indians. Chaudhury is the founder of Lucid Lines Productions, an intellectual properties company, and recently started her news show on YouTube called ‘Enquiry With Shoma Chaudhury’.

Other Resources About Shoma Chaudhury