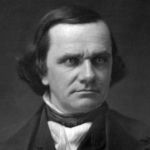 Why Is Stephen A. Douglas Influential?

According to Wikipedia, Stephen Arnold Douglas was an American politician and lawyer from Illinois. A senator, he was one of two nominees of the badly split Democratic Party for president in the 1860 presidential election, which was won by Republican Abraham Lincoln. Douglas had previously defeated Lincoln in the 1858 United States Senate election in Illinois, known for the pivotal Lincoln–Douglas debates. He was one of the brokers of the Compromise of 1850 which sought to avert a sectional crisis; to further deal with the volatile issue of extending slavery into the territories, Douglas became the foremost advocate of popular sovereignty, which held that each territory should be allowed to determine whether to permit slavery within its borders. This attempt to address the issue was rejected by both pro-slavery and anti-slavery advocates. Douglas was nicknamed the "Little Giant" because he was short in physical stature but a forceful and dominant figure in politics.

Other Resources About Stephen A. Douglas

What Schools Are Affiliated With Stephen A. Douglas?

Stephen A. Douglas is affiliated with the following schools: