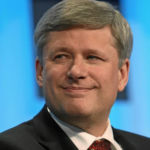 Why Is Stephen Harper Influential?

According to Wikipedia, Stephen Joseph Harper is a Canadian politician who served as the 22nd prime minister of Canada from 2006 to 2015. The longest-serving prime minister from a right-of-centre party since John A. Macdonald, Harper is the first and only prime minister to come from the modern-day Conservative Party of Canada, serving as the party's first leader from 2004 to 2015.

Other Resources About Stephen Harper

What Schools Are Affiliated With Stephen Harper?

Stephen Harper is affiliated with the following schools: