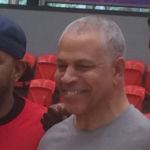 Why Is Steve Carfino Influential?

According to Wikipedia, Steve Carfino is an American former basketball player, who played for the University of Iowa in college basketball and later in the Australian National Basketball League. After retiring he became a television commentator, focusing on basketball, occasionally covering other sports. He is the younger brother of former University of Southern California player Don Carfino.

Other Resources About Steve Carfino

What Schools Are Affiliated With Steve Carfino?

Steve Carfino is affiliated with the following schools: