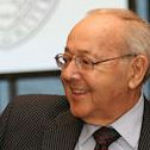 Why Is Sy Syms Influential?

According to Wikipedia, Sy Syms was an American businessman, entrepreneur and philanthropist, who founded the SYMS off-price clothing chain in New York City in 1959. Biography Syms was born Seymour Merinsky on May 12, 1926, in Brooklyn, New York. He was the youngest of eight children of Jewish parents who had emigrated from Russia. His family decided to change their surname from "Merinsky" to "Merns" when his father and elder brother George opened a store on Vesey Street in Lower Manhattan. Syms went to Midwood High School in Brooklyn. After serving in the United States Army, he attended New York University on the G.I. Bill.

Other Resources About Sy Syms

What Schools Are Affiliated With Sy Syms?

Sy Syms is affiliated with the following schools: